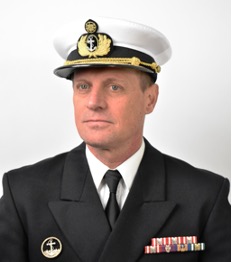 Commodore João Paulo Ramalho Marreiros was born in Lisboa, in 1966. He joined the Navy in 1984 and graduated from the Portuguese Naval Academy in 1989. He attended the Junior Officer Course at the Naval War College Course in 1998/99 and the General Officer Course at the Military University Institute in 2016/17. He holds a Master of Engineering in Geodesy and Geomatics at the University of New Brunswick, Canada, in 1997, and a Phd in Surveing Engineering at University of Porto, Portugal, in 2013.

He was the Portuguese Naval Academy Academic Dean since September 2014 until October 2017. Since October 2018 he served at the Military University Institute as coordinator of the Military Behaviour, Leadership, Logistics, Economics and Management education department, until September 2019. Since July 2019 he is in charge of the Research and Development Centre and Scientific Coordinator of the PhD in Military Sciences and the General Officer Staff Course.

Commodore Ramalho Marreiros has published technical articles in the subject of hydrography, navigation and military sciences.  He has received several commendations and has been awarded with one Exemplar Behaviour Medal (gold), one Naval Cross (1st class) one Military Merit Medal (2nd class) and four Distinguished Services Medals (silver).

For continuity, the Secretary will normally  include the past and future presidents on any significant correspondence. The transition between presidencies occurs at the conclusion of the annual conference.

Past Presidencies and Presidents